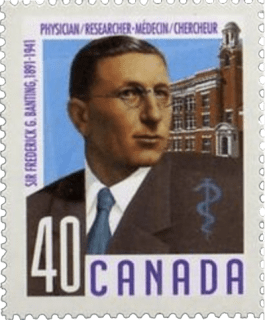 Sir Frederick Banting is most known for the incredible discovery of insulin, one of the most important medical breakthroughs of the twentieth century, for which he jointly received the Nobel Prize along with Dr. J.J.R. Macleod. He was the youngest man to receive the Nobel Prize in medicine.

Sir Frederick Banting's discovery came after his hypothesis of isolating the internal secretion of a protein called insulin turned into experiments with Charles Best, a student research assistant provided by Dr. J.J.R. Macleod. Together they began work in 1921 to prove that insulin could be a life-saving effective treatment for diabetes. They had a research and collaboration team included Dr. J.J.R. Macleod, James B.Collip, and a few other collaborators.

In 1922, their luck came with a 14-year-old boy who was dying, and they were able to successfully save his life by injecting him with insulin.

Banting House National Historic Site of Canada, the house where Sir Frederick Banting originally conceived the hypothesis that led to the discovery of insulin, is now a museum in London, Ontario.

Sir Banting was not only an incredible researcher, he was a decorated soldier who served Canada in both World Wars. He was also named Canada's first Professor of Medical Research and went on to be knighted by King George V.

Don't want to miss a blog? Subscribe now and you will receive email notifications for our weekly post.