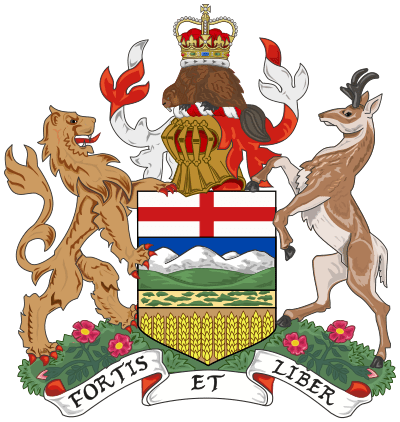 Alberta is a province in Canada's western prairies next to the Rocky Mountains. Its two major cities are Calgary, and Edmonton, the provincial capital. Edmonton is well known for West Edmonton Mall, the largest mall in North America, formerly the largest in the world. Another world-class attraction is the Royal Tyrrell Museum of Palaeontology in Drumheller, housing the largest collection of dinosaur fossils under one roof in the world.

Alberta is an important skiing destination for tourists. It has several world-class ski resorts. Canada Olympic Park, with its downhill ski and ski jumping facilities, is located in the city of Calgary.

Click on any community of interest below to learn more
Airdrie

Airdrie is one of the fastest growing cities in Canada with a population of around 70,000 and is municipality of the Calgary Metropolitan Area.  It is situated along the Calgary-Edmonton corridor, located 30 minutes from downtown Calgary. The city of Airdrie is what is called a bedroom community outside of Calgary, and has attracted young families due to its thriving economic opportunities, excellent schools, innovative appeal and technologies, and proximity to the bigger city with a small town charm. Located 20 minutes from Calgary International Airport, and 1.5 hours from Edmonton, it is an idyllic location with the opportunity to have the best of city and rural life.

Calgary is one of the most well-known cities in Canada, and is known around the world for its annual Calgary Stampede. Home to more than a million people, the city has a lot to offer it's residents and visitors. The city of Calgary has been ranked  the 5th most liveable city in the world by the Economist in 2017 for the 8th consecutive year. It is situated on the Bow River and the Elbow River in the south of the province, in an area of foothills and prairie, about an hour and a half from the Canadian Rockies, and anchors the south end of the Calgary–Edmonton Corridor. In 1988, Calgary became the first Canadian city to host the Winter Olympic Games.

Calgary is Alberta's largest city and Canada's third-largest municipality. The economy includes activity in the energy, financial services, film and television, transportation and logistics, technology, manufacturing, aerospace, health and wellness, retail, and tourism sectors. The Calgary CMA is home to the second-highest number of corporate head offices in Canada among the country's 800 largest corporations. The city is home to multiple post-secondary instituations including The Unviversity of Calgary, Mount Royal University, SAIT Polytechnic, Bow Valley College, and Alberta University of the Arts, and more.

The city of Chestermere is a lakeside commuter city just outside Calgary. It has a population of approximately 21,000, making it an ideal place to raise a family and enjoy a high quality of life just outside the city limits of a much bigger city. Chestermere enjoys a more relaxed style of living southeast of the city, while still having access to all amenities, public transportation, recreation, and education opportunities.

Edmonton is the capital city of the Canadian province of Alberta. Edmonton is on the North Saskatchewan River and is the centre of the Edmonton Metropolitan Region, which is surrounded by Alberta's central region. The city anchors the north end of what Statistics Canada defines as the "Calgary–Edmonton Corridor".

Edmonton's historic growth has been facilitated through the absorption of five adjacent urban municipalities (Strathcona, North Edmonton, West Edmonton, Beverly and Jasper Place) and a series of annexations ending in 1982. Known as the "Gateway to the North", the city is a staging point for large-scale oil sands projects occurring in northern Alberta and large-scale diamond mining operations in the Northwest Territories.

Edmonton is a cultural, governmental and educational centre. It hosts a year-round slate of festivals, reflected in the nickname "Canada's Festival City". It is home to North America's largest mall, West Edmonton Mall (the world's largest mall from 1981 until 2004), and Fort Edmonton Park, Canada's largest living history museum.

Fort Saskatchewan is a city in the Edmonton Metropolitan Area, located 20 minutes northeast of the capital city. The city has a population of approximately 26,000 residents and prides itself on offering big city's convenience with small town's comfort and hospitality. An interesting feature in this city is the use of sheep in their city parks as an eco-friendly way of looking after the parks. The sheep love the attention they receive from residents and tourists, and has been a part of the city parks for over 25 years.

Grande Prairie is a city in northwest Alberta, Canada within the southern portion of an area known as Peace River Country. It is located at the intersection of Highway 43 (part of the CANAMEX Corridor) and Highway 40 (the Bighorn Highway), approximately 456 km (283 mi) northwest of Edmonton. The city is surrounded by the County of Grande Prairie No. 1 and in turn surrounds the unincorporated community of T & E Trailer Park.

Grande Prairie was the seventh-largest city in Alberta in 2016 with a population of 63,166, and was one of Canada's fastest growing cities between 2001 and 2006.

The city adopted the trumpeter swan as an official symbol due to its proximity to the migration route and summer nesting grounds of this bird. For that reason, Grande Prairie is sometimes nicknamed the "Swan City". The dinosaur has emerged as an unofficial symbol of the city due to paleontology discoveries in the areas north and west of the Grande Prairie.

Lethbridge is the largest city south of Calgary, with a population of approximately 101,482 residents. The city is the commercial, financial, transportation and industrial centre of southern Alberta. Its proximity to the Canadian Rocky Mountains provides for warm summers, mild winters, and a moderate continental climate, with more than 320 days of sunshine per year. Each area of Lethbridge has its own charm, and list of things to do, but the south is both the oldest and busiest part of the city, making it much denser with history, culture and things to see and do. The city is home to both the University of Lethbridge and Lethbridge College.

The University of Lethbridge

Medicine Hat is a thriving city located along the Saskatchewan River in the beautiful River Valley. The city is in the southeast part of the province, about 3 hours from Calgary, and 2 hours from Lethbridge. Known as the “Oasis of the Prairies” and Canada’s sunniest city, it is a relatively small city at 63,000 residents but with a lot to offer including the lowest combined tax rate and lowest utility rates in Alberta. The city and surrounding area has unique attractions, regional parks, lake and river spots for camping, swimming and outdoor activities.

Okotoks is a town located just outside the city of Calgary, approximately 18kms south. It is home to almost 30,000 residents, and has experienced a 30% population increase since 2008. It is known as a progressive and business friendly community with an entrepreneurial spirit. It is situated on the Sheep river, with beautiful Rocky Mountain views.

The Town of Okotoks

Red Deer is a city in Alberta located halfway between Calgary and Edmonton, along Alberta’s busiest highway - The Queen Elizabeth II (QE II). It is the province’s third largest city behind Edmonton and Calgary. Red Deer has a population of about 101,000, and is a bustling foodie city, capitalising on the rich agricultural heritage. The economy is based on the oil and gas industry, agriculture, manufacturing, petrochemicals, and transportation. It is home to Alberta’s Sports Hall Of Fame, and is the hometown of many NHL players and Olympic gold and bronze medallists. The Red Deer River flows through this city, giving it plenty of scenic spots for all water activities including river floating and canoeing.

Well over two-thirds of Strathcona County residents reside in the urban centre of Sherwood Park.

Started in the mid-1950s as a satellite community to house employees of the Refinery Row industrial area, “The Park,” as it is sometimes known, has become a "community of choice" for people wanting to live in a smaller community. Today, residents appreciate the community for its safe neighbourhoods, popular recreation facilities and green space, excellent schools, and high-quality police and ambulance services. Sherwood Park is decidedly an attractive place to live. A testimonial to that fact is that many people born and raised in Sherwood Park are now raising their own families here.

Centre in the Park is a newer development in Sherwood Park, nestled in among its more mature neighbourhoods. The development combines local government and municipal services with modern residences, retail services and inviting public spaces. It links to existing amenities such as Broadmoor Lake Park, Festival Place, the Heritage Trail system, businesses and schools. The Community Centre completes this core gathering place for culture, learning, services and celebration.

There has been tremendous growth in Sherwood Park, particularly over the past two decades, evidenced by population statistics, robust housing and retail starts. Sherwood Park residents boast a strong ethic of community and volunteer involvement. Indeed, the future of Sherwood Park promises to be a good one.

Spruce Grove is a city located just 11 km outside Edmonton, Alberta. It is a dynamic city with a young demographic that is family and community oriented, with excellent schools and amenities. You are never far from the hustle and bustle of neighbouring Edmonton, the city of one million people, but you are far enough away to enjoy the rural lifestyle of the community of 40,000 residents. Spruce Grove is a great mix of city conveniences and outdoor and leisure options including access to all-weather adventure trails.

St. Albert is a city in Alberta, Canada, on the Sturgeon River northwest of the City of Edmonton. It was originally settled as a Mйtis community, and is now the second-largest city in the Edmonton Metropolitan Region. St. Albert first received its town status in 1904 and was reached by the Canadian Northern Railway in 1906.

Strathmore is a town located along the Trans-Canada Highway in southern Alberta, Canada within Wheatland County. It is approximately 50 kilometres (30 mi) east of the City of Calgary.