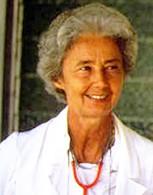 Dr. Lucille Teasdale became one of Quebec's and Canada's first female surgeons in 1960. An incredibly accomplished female surgeon and humanitarian, Dr. Teasdale is one of our Canadian medical pioneers and heroes.

By 1961, she found herself in Lacor, Uganda, after accepting an offer from Dr. Piero Corti to help run a clinic that desperately needed a surgeon. This initial two month trip would be the beginning of a lifelong commitment to both Uganda and Piero Corti, whom she married by the end of that year.

Dr. Lucille Teasdale dedicated 35 years of her career in Uganda, where she was the only doctor in the region and spent her days tirelessly performing surgeries, often back-to-back on a makeshift table with inadequate lighting. She spent years as the only surgeon in basic conditions. Over the years, her and her husband continued to find funds to expand the Lacar Hospital and teaching facility throughout the war years of this region, and their legacy in Uganda that has survived until today.

Dr Teasdale was known for her abundant energy and her enthusiasm to keep going, sparked by her surroundings and often working around the clock to treat as many people as possible. By the mid 1980s, something had begun to change. She began losing weight and suffered with symptoms that she could not put off any longer. She flew to Italy to find out from her doctor that she had contracted AIDS, likely from performing surgery on war victims. She was given two years to live, but managed to tirelessly work for 11 more years.

Dr Teasdale passed away in 1996, but the medical centre and her legacy continues to thrive, and has become an important centre for the treatments and prevention of AIDS. Many of the doctors still practicing there were trained by Dr. Teasdale herself.

Dr. Lucille Teasdale received the Order of Canada in 1991, and during her years she received over twelves different honours and awards, including being inducted into the Canadian Medical Hall of Fame.

Both Dr. Teasdale and her husband Piero Corti were dedicated humanitarians and leaders for change, setting up the Lucille Teasdale and Piero Corti Foundation toward the end of her life so that they could guarantee that the important work of the medical centre would continue past both of their time. The Foundation is now run by their daughter Dominique, who proudly carries on her parents legacy.

Born 1929 in Montreal, Dr. Lucille Teasdale eventually succumbed to her illness in 1996 in Italy.

When you subscribe to the blog, we will send you an e-mail when there are new updates on the site so you wouldn't miss them.