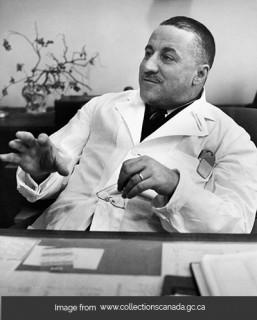 He was a pioneer in the specialty of physical and rehabilitation medicine, and founded Montreal Institute of Rehabilitation in 1949. Dr. Gustave Gingras was a devoted and fierce advocate for the rights of people with physical challenges. He not only started a Canadian program that would assist children that were the victims of thalidomide, he lobbied government and social institutions to provide barrier free access facilities for those who are physically challenged, and tirelessly lobbied for employment and educational opportunity legislation for physically challenged individuals. He served as a consultant to the World Health Organisation, the United Nations, and the Canadian Red Cross as an expert in rehabilitation medicine. He traveled across Canada and internationally to assess rehabilitation needs and set up programs in countries around the world including many South American countries, Morocco, South Vietnam, and Cameroon. He received many honours for his work over his lifetime, including a Companion of the Order of Canada, and was inducted into the Canadian Medical Hall of Fame.

A fantastic article was written on Dr. Gingras in Maclean's Magazine in 1969, and shows who this truly remarkable man was.

Dr. Gustave Gingras was born in 1918 in Montreal, Quebec, and died in 1996 in Prince Edward Island.

Google Rating
4.9
Based on 16 reviews