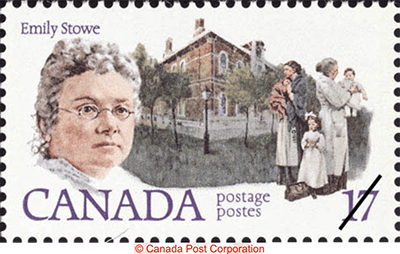 In fact, this feature highlights three trailblazing women in medical history in Canada, with Dr. Emily Howard Stowe at the forefront.


Dr. Emily Howard Stowe has earned her right in Canadian history as the first Canadian woman to practice medicine in Canada. She was also an incredible champion for women's rights in Canada, earning herself the title of the mother of the Suffrage movement in Canada. She spent her whole life campaigning and eventually succeeding for women's access to medical schools she herself was refused entry to because she was female. She was forced to study medicine in the Untied States after being denied entry to the Toronto School of Medicine, the second time she was denied into a school in Canada for being female. She vowed early on to change the opportunities available to women, but first she needed to advance her education however she could.

And so her journey began at the New York Medical College for Women, a homeopathic institution in New York city, where she obtained her degree. She returned to Canada in 1867, setting up practice in Toronto, becoming the first practicing female physician before actually obtaining her licence in Canada. Changing their policies on doctors trained in the United States, by the mid 1860s the medical profession now required these physicians to take further courses before being granted licences to practice. This created more hardship for Dr. Stowe, as she was still denied entry to the University of Toronto, even with her degree!

Her determination persevered, and in 1871, Dr Stowe along with Jenny Kidd Trout, were finally admitted to the Toronto School of Medicine, where they suffered constant ridicule and humiliation by both their student peers and faculty members. In fact, it was Dr. Jenny Trout who became the first licenced female to practice medicine, as she was the first to pass her exams.

Her relentless championing of women's rights in medicine paid off when her own daughter Augusta Stowe-Gullen became the first female physician to graduate from a Canadian medical school in 1883.

In the same year in a public meeting led by Dr. Stowe and the Suffrage Association, the foundation of the Ontario Medical College for Women was granted, Toronto's first medical school for women. This teaching hospital remains a legacy today in the advancement of women's health.

Don't want to miss a blog? Subscribe now (top right) and you will receive email notifications when we post.

BC Air Ambulance Pilot – An interview with Ian Jones

Google Rating
4.9
Based on 19 reviews